Review of "Her Dragon's Fire" By: Julia Mills 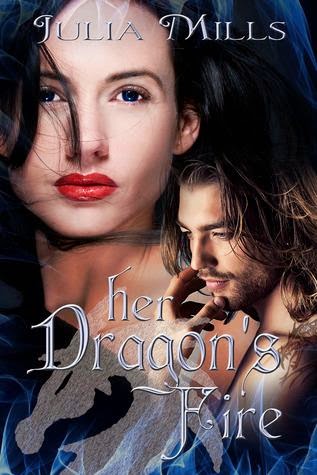 Her Dragon's Fire takes us back to the world created in Her Dragon to Slay of humans, Dragonshifters, hunters and magic. This is the story of the second member of the Dragon Guard, Aiden.
Aiden is a Dragonshifter, part of an ancient clan which serves to protect dragons by sharing the same space as them and can call the dragon from within when needed. The first book saw Rayne find his mate, Kyndel and introduced the reader to the rest of Dragon Guard clan. Aiden already knows who his mate is but he has been punishing himself as searching for her got his brother, Andrew, killed. Unfortunately Andrew was captured, rather than killed and has feelings of extreme anger and betrayal towards his clan and is out for revenge because they didn't search for him. Grace is the lucky lady destined to be Aiden's mate. Grace is Kyndel's best friend and a highly successful lawyer, working on a case that involves abducted women. She is a hard working, fiercely independent woman, who is sometimes stubborn and finds it very difficult to trust men.  Aiden has been fighting his attraction to Grace since the incident with his brother and is determined not to act on his deep feelings until Andrew has been caught. He is staying in Kyndel's house but managing to avoid Grace when she visits. Grace has never met Aiden but is instantly turned on by his smell when visiting Kyndel's house. When they do meet, sparks fly as the attraction between them is strong. However it is not long before Andrew plans to use Grace in his plan of revenge against his brother and the rest of the clan. But his plan starts to unravel when Grace is attacked by those working with the warlock he needs to increase his power. This was definitely not part of the plan. Aiden and his clan manage to save Grace from certain death at their hands and this forces Aiden and Grace to confront the intense feelings they have for each other. In the aftermath as Grace tries to come to terms with the attack, she finds comfort in Aiden's body.


Julia Mills manages once again to blend the two worlds together beautifully and has created characters that are likeable and remarkable. Grace's intuitive nature stands her in good stead and means that she senses trouble and liars. Grace trusts Aiden implicitly and quickly, going completely against her suspicious nature when it comes to matters of the heart. The descriptions of the intense moments between Grace and Aiden draw you in through the beautiful writing. Equally, the story has lots of action and twists and turns to keep you on the edge of your seat and biting your fingernails in anticipation. I'm looking forward to seeing the rest of the clan discover their mates and seeing how the ongoing story develops as the series progresses.