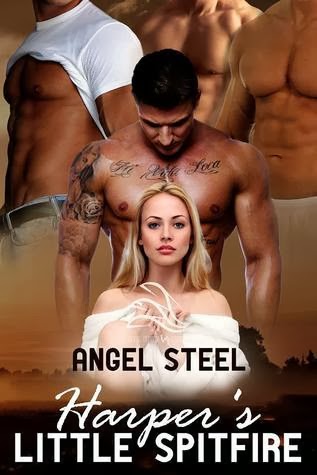 Sage Matthews is a 25 year old virgin. For years she’s thought of the Harper brothers as brothers, but that has all changed. Sage can’t stop thinking about them and they can’t stop thinking about her. Several times the brothers and Sage engage in sexual trysts, yet Sage remains a virgin in the conventional sense for a good portion of the book. While each of the Harper brothers have no problem pleasing her sexually, Mac seems to lack the emotional connection to her that the other brothers have and is cruel to her on more than one occasion. Will Mac ever open up his heart to Sage and will she ever be able to choose just one Harper brother? In my opinion, Harper’s Little Spitfire is both a love story and erotica. Sage and the Harper brothers seem to love each other, although the love that they share with one another is not conventional. This is absolutely the book to read if you are looking for spicy sex scenes, as the Harper brothers and Sage deliver! For those who are a little less adventurous than the scenes with Sage and several of the brothers at once there are a few of her with each individual brother that are just as steamy.