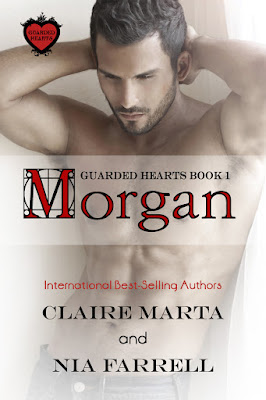 When grad student Morgan Leviss chose sexual surrogacy for her thesis, she never expected to become one. Now she’s tasked with turning two reclusive men into social creatures. Zac Blackstone and Aiden Goldman are nothing like what she expects. Handsome and charming, they’re a puzzle she finds intriguing.
Zac and Aiden have known each other for over two hundred years. Part of a cadre of shifters, they’re on a mission to mate and procreate. Powerful warriors for centuries, they lack the social skills and sexual experience needed to attract a partner. When a beautiful redhead comes into their life to teach them, they discover new hope.
Bound by secrecy, the men can’t tell her who they really are. What they are. Increasingly drawn to Morgan, they begin to recognize her as their fated female. Convincing her that she’s theirs may be as hard as keeping her alive when danger appears from the shadows.
Morgan is the first in the Guarded Hearts Series of standalone Erotic Paranormal Romance Ménage deftly penned as subtle Romantic Comedy with a heat level that’s off the charts. Written for Ages 18+. 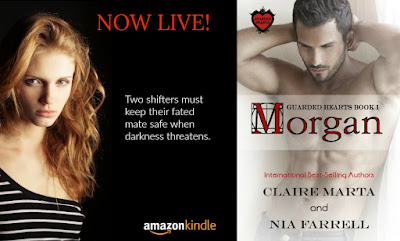 Morgan was speechless. When scholarly, bespectacled Emmett had escorted her upstairs tonight, she never expected to be met at the door by two very naked and extremely well-endowed men.
Holy. Shit.
Tonight’s session was supposed to be about discovery. Shedding clothes, honestly evaluating your body, discovering hidden strengths, discussing doubts, and finding ways to work through them.
These guys seemed to be doing just fine.
She picked her jaw up from the floor and forced her feet to move forward from where she’d been frozen in place, stunned by the sight of them. Zac might be older, but dear Lord, he was perfection, from the manscaped hair on his chest to the Adonis belt pointing the way to the promised land. Aiden could be a cover model, with his chest shaved and lightly oiled muscles gleaming in the glow of dozens of lit candles that were scattered around the room.
Jesus, take me now.
“Good evening, Morgan,” Aiden greeted her, his voice slightly roughened. “We have prepared ourselves for this evening as required for this session.”
They were both staring at her expectantly.
Leaving her coat and bag on her normal chair, she ran her palms nervously down her sides. “Yes.” She cleared her throat. “I can see that.”
They moved to stand beside the sofa. She sank into the recliner facing them. They looked so at ease with their nudity. As if it didn’t bother either of them that they were buck naked in front of each other. Morgan was having a hard time keeping her mind on track. An insidious little whisper in her head kept telling her to skip sessions. It was accompanied by images of sweating, thrusting bodies.
“Is something wrong?” Zac inquired when the silence stretched. “You seem… uncomfortable.”
Morgan blinked. “No. No. It’s just not how I planned it. I thought that we would talk first before you stripped. I wanted to discuss how you feel about your bodies and what you think are your individual strengths and weaknesses.”
“I don’t like my toes,” Zac said, squinting down at them. “They seem too…, I don’t know. Gnarly? Other than that, I am pleased with this vessel. It is that of a well-made, mature man who can handle whatever life brings him. Aiden tried to talk me into shaving my chest, but I read that some women find the tactile sensation of chest hair to be pleasing. What do you think about furbabies?”
Morgan forgot to breathe for a second. Furbabies? Was this leading into some Furries kink where everyone dressed up as cute animals? She couldn’t imagine either man dressed up in a bunny suit but she didn’t yet know their sexual tastes. After the spanking incident, anything was possible.
“I… um, like men with chest hair,” she admitted. “And you're right. Some women do enjoy the sensation, especially against sensitive parts of their bodies.  Your scruff...”
Zac arched a questioning brow.
Morgan felt her cheeks warm ten degrees. “Yes,” she croaked, wondering how in the hell she was going to talk herself out of this one. She’d been imagining how it would feel against her skin while she rode his mouth. “A soft beard can be very stimulating. An abrasive, prickly beard can hurt to the point of turning someone off, whether it’s kissing or oral stimulation.”
“Like cunnilingus?” Aiden asked.
“And fellatio,” she stated, her gaze caroming between the two of them. “When two men have a relationship with each other.”
“We wouldn’t know,” Zac told her. “We’ve never been with a woman to find out. Soon, though, we hope. We have been watching threesomes in porn to see how these things work.”
They wanted a threesome?
Oh. My. God.
Morgan’s thighs clenched together, her body reacting to the thought of having both of them between her legs. Christ. It was hard to not be aroused.
She had two naked virgins, eager for their first sexual experiences. This was supposed to be one on one when the time came, and they were already planning a threesome. Could she handle both of them? Should she even try?
Reality couldn’t be as good as the wet dreams she’d been having. Most mornings, she woke up needy and desperate and grateful for her roommate’s foresight to buy batteries ahead.
Who needed BOB when she could have Loki and Thor? 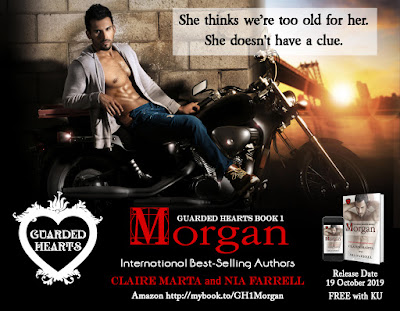 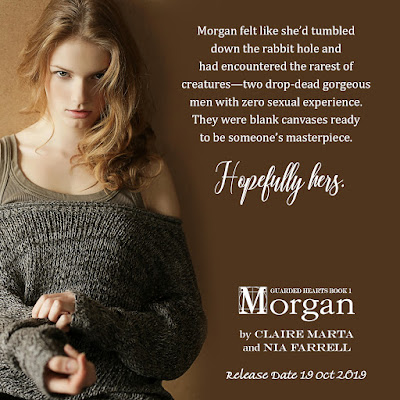 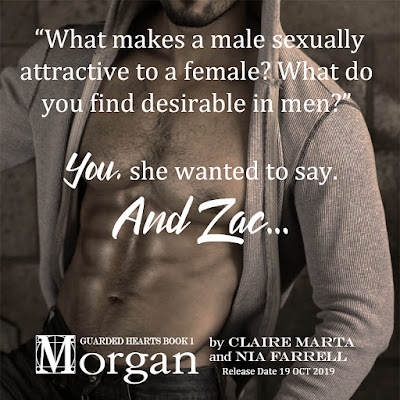 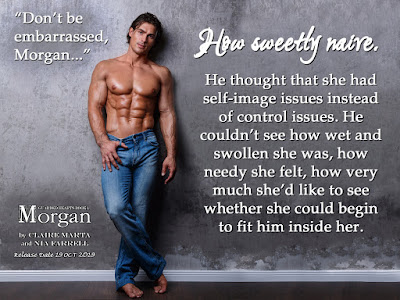 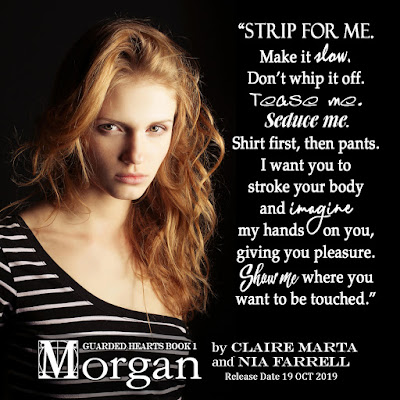 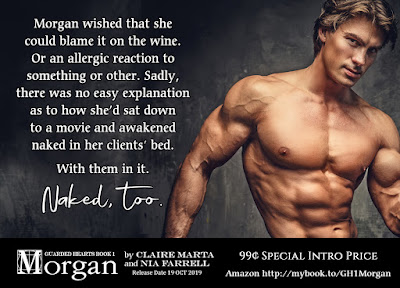 Claire Marta: A native Brit, I live in Italy with my husband and daughter. When I am not writing and drinking copious amounts of tea, I enjoys taking photos of my adoptive country, trying to stay fit with running, reading amazing books and being a stay at home mother.