Bleed for Her by RB Hilliard 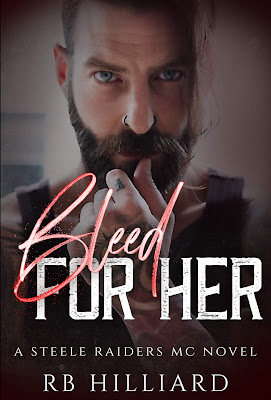 Reynolds Walker has had enough drama and heartache to last a lifetime. Finally back on track, she’s looking forward to the quiet life she’s built for herself. When she comes home to discover her almost-fiancé dead and his killers hunting her, she’s left with no choice but to run. Little does she know that the past she’s fought so hard to escape is about to catch up with her.


Clay Buckson has carved out a new life for himself. As a member of Steele Raiders MC, he has everything he’s ever wanted, except for the one woman he can’t have—Reynolds Walker. When his world threatens to destroy hers, he has no choice but to step in. Can he save her before it’s too late, or will he lose her again forever?
Sometimes you have to fight for love, but sometimes you have to bleed for it.

I haven't enjoyed a good MC romance in a long time. This had everything-brothers bond, unity, and realness. I have a feeling I'm going to read more of this series. I. Highly recommend. ~Wickedly Sweet and Synful Book Blog Twilla.

This is a hot and sexy love story but is also a thrilling mystery. ~Comfy Couch Book Reviews

This book was delightful. I love the relationship that these two grow into. Excellent writing. ~Spunky N Sassy

RB Hilliard has set the bar high with her debut novel in the MC world. Bleed For Her has it all: romance, suspense, angst, grit, and true brotherly love. Excellent writing and storytelling. ~Book Club Gone Wrong 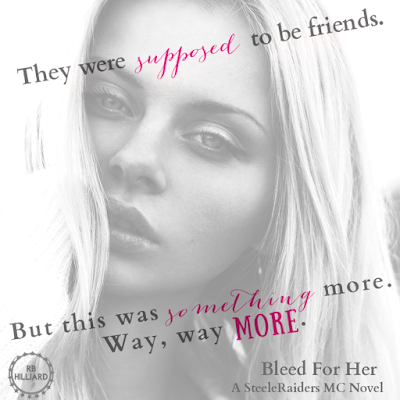 This was where things got tricky. Buck knew he could offer up a spare room, but that wasn’t going to happen. He wanted her in his bed. He wasn’t kidding himself. He knew nothing was going to happen between them— at least not tonight— but that didn’t stop him from wanting her there. Reyn eyed him warily. Pushing back from the stool he’d been sitting on, Buck stood. His eyes locked on hers and he held out his hand. “Come.” As if sensing a predator in her midst, she took a step back. “I can sleep on the sofa,” she stuttered. Her words irritated him. Hell , her actions irritated him, and Buck was sick and tired of feeling irritated. “You can, but there’s no telling what’s on that sofa.” Her nose turned up as she slowly digested his meaning. He arched a questioning brow. “Still want to sleep there?”“No, but you’re not sleeping in the bed with me,” she shot back at him. He hated to admit it, but her words and the way in which she’d said them— as if she’d rather sleep with a piece of shit than with him—stung. Buck lashed back at her. “People are trying to help you, so you might want to check the attitude.” Dropping his hand, he brushed past her as he headed in the direction of his room. No, he definitely did not like the new Reyn . For all he cared she could sleep on the damn jizz-covered couch. The Cave reminded Buck of just that; a giant man-cave. The red-brick monstrosity was three stories tall. The basement had a large room where they held all of their meetings, plus three additional bedrooms, one of which belonged to Steele. It also held the security room which was Buck’s domain. The main floor held the living room, dining room, kitchen, game room, med room, and both Steele and Jake’s offices. Upstairs had five bedrooms, all with their own bathrooms, plus an additional living area. As Buck hit the stairs, he heard Reyn ask, “How big is this place?” Relieved that she’d chosen his bed instead of the sofa— Buck wasn’t lying. They called that thing “the cum couch” for a good reason —he answered, “Seven thousand square feet, give or take. ”“Do you and Ax live upstairs?” Him, Ax, Rider, and two others, he thought, but answered, “Yep.” The place was relatively empty, at least for a little while. Other than Steele, Goose, Cupcake, Loco, and whoever was boning in the game room, the rest of the club was with Jake trying to find who jumped Sledge’s ol’ lady. Buck expected them to roll in anytime now. He paused at the top of the stairs and waited for her to catch up. They passed by Ax and Rider’s rooms before coming to his. “This is my room,” he muttered as he ushered her inside. Reyn barely made it across the threshold when she suddenly stopped dead in her tracks. Back stiffening, she turned and pierced him with a disgust-filled glare. Buck glanced past her to the bed, his eyes freezing on the figure curled beneath the covers. Motherfucker. He’d completely forgotten about Tara. In a tone filled with contempt, Reyn snarled, “On second thought, I’ll take that sofa after all.” And brushing past him, slammed the door loud enough to rattle the entire house. Buck walked over to the bed, slapped Tara on the ass, and told her it was time to go. Then he dropped his head back, stared at the ceiling . . . and smiled.

RB Hilliard lives in Charlotte, North Carolina with her husband and two children. In 2012, she began writing His End Game, the first book in her MMG Series. Hilliard has not only published six books in this series, but has gone on to publish her hilariously funny Whisky’s novels, as well as her Rock Star Romance Series, Meltdown. 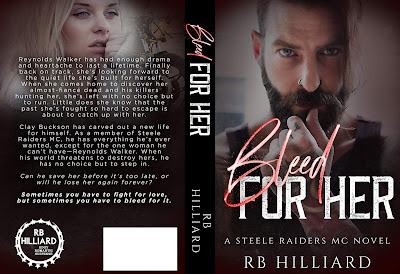