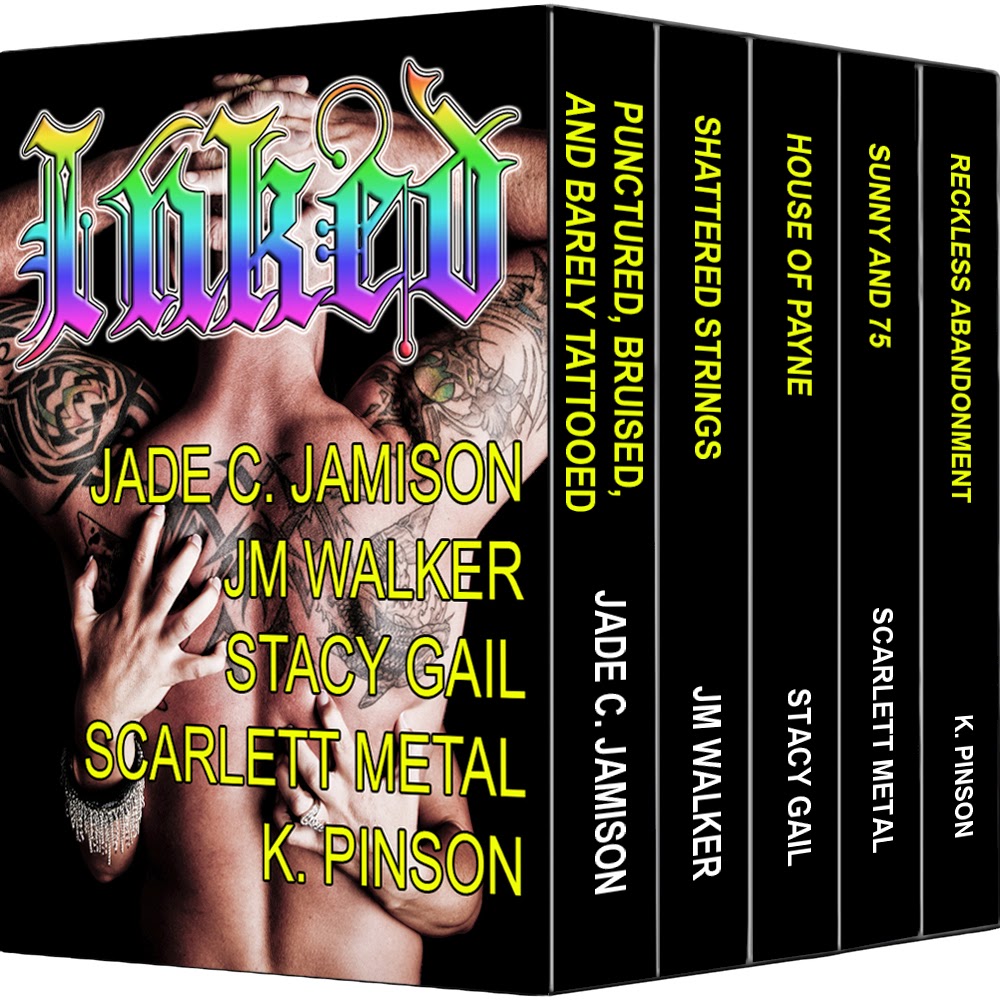 Kory McCallister has had her eyes on tattoo artist Stone Bowman for quite some time—so long, in fact, that no other guy will do.  Stone pushes every turn on button Kory has—he’s tattooed from head to toe (well, at least she prays he’s tattooed on his lower half); he’s hot; he’s funny and charming; and he’s also mysterious.  So when Kory’s friends dare her to ask Stone out on a date, she can’t believe she actually finds the guts to do it.

More surprising?  He takes her up on the offer.

She discovers that, while his past might not be quite as dark or mysterious as she’d imagined, it’s bigger than she’d expected, and it’s something she will need to contend with if she decides she wants to keep him around to color her life for good.

Evancroft. This one word means everything to me. My band. My heart. My life. Without the music, I am nothing. I don’t exist. When we play, we are one. We are in control.

On stage I am a woman. Powerful. Dominating. Forcing the crowd to submit to my words. Off stage? I am the complete opposite. Innocent.

Jace Croft. He is the oil to my water. The darkness to my light. My band mate. My best friend.

One unexpected night together unleashes new feelings that we both try to ignore but the band comes first. It always comes first.

Or so I thought.

Life is supposedly what you make of it, but that’s crap as far as 3D artist, Becks Delgado is concerned. She never wanted her brother to die in a car accident… or to be the one who was behind the wheel. Her external scars are nothing compared to the raw wounds inside, and death seems to be the only way to find peace.

Sebestian Payne took the concept of a tattoo parlor and transformed it into a sophisticated gallery of living art. The House Of Payne now caters to the rich and infamous, has garnered a worldwide following, and is run by Sebastian with an iron fist. He knows Becks is exactly what The House Of Payne needs, but there’s a problem. The accident that changed her life left its mark on him as well, and whether he likes it or not, it’s time to put his House in order.

Julia had the perfect life...or so she thought.  On the eve of her wedding, her world came crashing down on her.  She escaped it all, heading out on the trip that was planned as a celebration.

Aiden was living the dream, working as the head bartender at a resort on Punta Cana.  Every day, he fights the demons of his past as a Marine, even in the midst of paradise.

He comes to Julia's rescue one night and after numerous run in, start spending time together.  Things get physical quickly, but is there more to their relationship?  What happens when Julia has to head back to reality?  Will Aiden join her or is he unable to get past the memories back home?

Cohen Archer, a fresh faced kid new to Sunnydaze Trailer Park, begins a new life with his recently widowed mother.  When Cohen spots his new neighbor Brynn Jenkins crying at a weathered picnic table in the middle of the courtyard, his life is forever altered. Who knew an eight year old was capable of love at first sight?  Falling into a protective role, Cohen races to the rescue every time Brynn calls. But he isn’t the only one.

Brynn and Ariana Jenkins don’t live a life of grandeur. Their alcoholic, drug abusing mother is the very definition of “Trailer Trash,” but Brynn never has to take the abuse their mother doles out. Ariana takes it all so that her little sister can live a normal life, ultimately causing Ariana to harden and become difficult to love.

As years pass by, Cohen’s feelings only grow stronger for Brynn, but hers remain the same. Best friends, nothing more.  After years of pursuing Brynn, Cohen realizes that she is nothing like the girl he had fallen for when they were children. Brynn’s main aspiration is to have a good time and she falls in with a dangerous crew in the fast lane.  Everyone from her former life falls off her radar.  It is only then that Cohen sees Ariana in a different light and realizes that she is really the other half to his whole. He doesn’t need to protect her; he just needs to complete her.

Ariana has always loved Cohen from afar, not trusting herself and the cross she bears to be strong enough to give him the love he so desperately yearns.  He finally cracks her tough exterior just as tragedy strikes.  When Cohen is pulled back into Brynn with reckless abandon, every other relationship he built falls apart at his feet.

This is a gripping tale of three very different lives intertwining to create a perfect blend of despair, growth and love in every stage.

Jade C. Jamison:  Jade C. Jamison was born and raised in Colorado, moved from one city/town to the next, and she’s decided she likes it so much she wants to stay…although travel is not out of the question.  She lives in a big town in Colorado (not unlike Winchester!) with her husband and four children.  She is working on becoming a crazy cat lady.  Okay, so maybe not.

Still want more?  Jade has a bachelor’s degree in English Literature and Theater, a master’s degree in English, and a master of fine arts in Creative Writing.  Obviously, she loves school and the student loan folks love her.  She works in human services by day, teaches English and creative writing at night, and—in between playing soccer mom and community leader—writes like a fiend.  Someday soon, she’ll narrow it down to just writing, but let’s get all those kids off to college first.

JM Walker:  When J.M. isn't working her Monday-Friday 9-5 job, she's spending her time reading, writing and with the love of her life.

She's an all around Canadian girl. Born and raised in a small city.

If you don't see J.M. writing, you'll find her with her nose in a book. Whether it's her words or someone else's, she's drawn to it.

J.M. loves stories with Alpha broken males and that need to be ripped apart and put back together again. Men that fall to their knees over a wink or a giggle from their females.

Two things you will never find J.M. without; her cell phone and lip gloss. If she has both of those items, you have a happy girl.

Since starting her writing adventure in 2013, J.M. has met many people, real life, online, in her head and she loves every single one of them. Without the support from others, none of this would be possible and she's grateful for all that has been given to her.

Stacy Gail:  A competitive figure skater from the age of eight, Stacy Gail began writing stories in between events to pass the time. By the age of fourteen, she told her parents she was either going to be a figure skating coach who was also a published romance writer, or a romance writer who was also a skating pro. Now with a day job of playing on the ice with her students, and earning her tenth contract with Harlequin's Carina Press, both dreams have come true.

Scarlett Metal:  Scarlett lives in the Midwest with her sexy husband, two girls, and three furbabies. She dabbled in writing right after college but it wasn't until she took up blogging about eight years ago that she started writing seriously. After writing a few boring service pieces for some online publications, she went back to her true passion, fiction. When she's not busy writing steamy stories, she can be found with her nose in a book, camping, or geocaching with her family. She loves Diet Coke, Tina Fey and Amy Poehler, and 80's hair bands.

K. Pinson:  K.Pinson, who also moonlight's as Kate Lynne, is a 23 year young girl from a small farm town in Michigan. She spends her time reading, writing and working as a manager for an assisted living facility working with mentally challenged adults. Her stories are inspired by real-life events happening all around her with an added love interest and a psychological twist around each corner. She is single, but the proud mother of a terrible cockapoo dog named Jezebella. She is currently seeking a degree in music therapy and seeing where the writing world will take her.