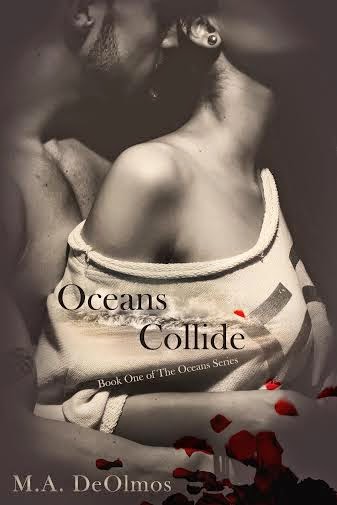 Oceans Collide, Book One of The Oceans Series
Souls Collide as Heart Break…

Livie Acosta is a young woman who at the tender age of twenty-three has suffered such strong and heart-wrenching emotions, that she no longer accepts them into her world. Throughout her life beginning at the age of seven she has rebuked such emotions with a fierce passion. One horrific incident that resulted in her mother's miscarriage started the chain of pain she's had to battle and live with. Through the abuse and abandonment she receives at the heavy hand of her mother, Livie finds the only way she can survive is to curb her ability to feel emotions, and unfortunately the only way she knows how to achieve this paradise is by 'cutting'.
For years she has lived in a sheltered bubble, avoiding people, along with any aspect of life that requires one to show emotion. Not to mention her decision to stay close to her mother has her leaving the comfort of her own home nearly on a nightly basis to save her mother time and time again. It takes the sudden death of her mother to force Livie out into the world in search for a new purpose. Upon this forced quest she immediately meets one of two souls that are going to rock her world into a new dimension. Lawrence Hawthorne knows pain, grief, and emotions period, all too well. Despite his carefree nature and easy going personality he also harbors some tough demons that immediately draw him to Livie. It doesn't take long to recognize the deeply seeded pain that resides in her own soul and that leads Lawrence to call on his right hand man for help in protecting her.
As soon as Ocean Hawthorne steps onto the scene, Livie's world... the void world she's known since forever changes in a way that threatens to expose her secret. The Hawthorne cousins, vow to protect her from her self-destructive qualities amidst the angst, pain, and trials they all individually go through. Desperately they hold onto each other for support and as love and passion blossom it threatens to destroy the weak foundation of solitude that Livie has strived so hard to achieve. Will the intrusion of two beautiful and tortured souls finally be enough to induce the strength Livie needs to fight her demons, or will their love and devotion finally push her far enough to make the deepest cut she'd ever been forced to make? 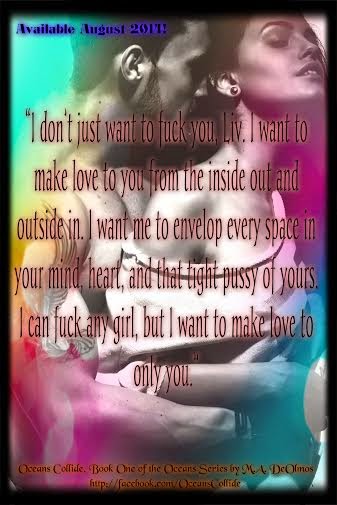 Rating: ☆☆☆☆☆
There is only two reasons why Livie's mother would be calling her at 3AM, was either drunk off her ass and needed her help or two she was higher than cloud nine and she needed her help. She got two calls from her mother in less then an hour which means bad news. The company that her mother keeps around was down right bad news. Livie found her mother too late to save her, she committed suicide, there was a letter that her mother wrote to her but she doesn't want to read it yet. Antonio paid Tara, Livie's half of the rent to the end of the year, he also got her a suite and paid that for three weeks. Three weeks is all the time she has to get herself together, she didn't want to accept it, but her dad said she can and she will she also had to promise to go to New York. Lawrence met with Mackenzie at Starbucks to sign the lease and get the keys for his studio. He was so excited to go to the studio and forgot to lock the door and when he got to the front he saw sunshine. He looked at Livie's portfolio and asked her to fight him, he got knocked down twice and he gave her the job. He asks Livie to help him name the studio and she thought of HAWT. Law calls Ocean for his help, he comes to help him and he walks into the house and runs straight into Livie. He started to call her Zena and she didn't like it so she told him to call her Livie. They all went on a trip to Boston and Ocean walks into Livie's room and see's her scars.

Livie doesn't wear shorts or anything where people can see her scars, she is a cutter , kick boxer, she is 23 years old, she started Martial Arts training and jujitsu training at the age of eleven. She gets called sunshine by Law. Antonio Acosta is Livie's dad, he is a known realtor in New York, he is 42 years old and he left Livie when she was 18 years old. Lawrence lives with his mother while saving up money to start his own Martial Arts Studio. He is 25 years old , has MMA Titles, his father's a sore spot. He is very protective of Livie, he also sees the pain in her eyes. Ocean is Lawrence's cousin, he hasn't been home in four months, it causes to much pain, his sister was his world and his heart. He got addicted to cocaine, Law got him into rehab, he also sees the pain in Livie's eyes. Layla is Lawrence's mom, she is a pediatric specialist.

This story had me feeling a lot of emotion. I loved how I could feel the emotions of the characters. I also loved that they all have there own demons to fight. I also loved that I couldn't put this book down. This is the first book in the Ocean series. This is also my first book by M.A. DeOlmos and it most definitely will not be my last. I'm looking forward to the second book in this series. I loved her style of writing. If I could give this book more then 5 stars I would. I highly recommend this book. 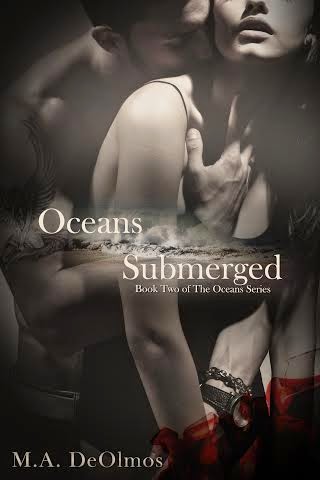 Oceans Submerged, Book Two of The Oceans Series
If You Drown, I Drown…Remember?

Twenty-seven year old Ocean Hawthorne thought he'd known loss and pain when his twin sister Stormie died. It was his fault the world would no longer see her beautiful smile or hear her captivating laughter. The former world champion in the vicious world of MMA fighting thought he'd been through the worst and has now carried that guilt and pain with him since. Then he met Livie Acosta. The moment he laid his eyes on the exotic beauty, he was hooked. In that split second of looking into her wild and hurt eyes, his heart began to beat again. He knew then that he would never be able to let her go... but was that the right thing for him to do? Because yet again, Ocean found himself surrounded by a familiar darkness, a pain so strong that even breathing hurt, and living felt impossible. He'd pushed too far in the effort to love and help her, and now... now he didn't know if he'd ever see her again. Lawrence Hawthorne has been through the ringer when it came to hurt and disappointment, but nothing could have prepared him for the possibility of losing Livie. He'd just found her and now-well, now he didn't know what to think. To him, Livie was more than just a girl, more than just a friend. To Law, Livie was someone he needed to help and protect, even from herself, and he'd failed that simple task. Will the Hawthorne cousins who have sworn to protect Livie survive her selfish act, or will they crumble, yet again? 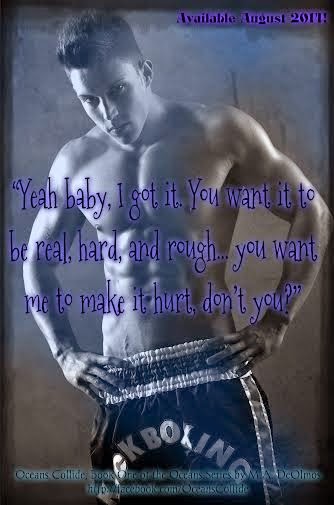 Ocean has been sitting in Livie's room at the hospital refusing to leave for weeks. The only reason that he had clean clothes was because of Law. He didn't like the idea of anybody taking care of his Livie. So he learned how to give sponge baths so he could take care of her himself. She finally woke up when Ocean was ready to punch Law in the face. Livie has to go into rehab for one month, with visitation only on Tuesdays and Thursdays. When they got to the rehab facility Ocean didn't want her to go because he knew that he was going to end up going back to the way he was before he met Livie. The drugs, sleeping with random girls. While at the rehab center she met her roommate Dulce and they connected right away. She helped Livie when she needed it. On her way back to her room from physical therapy Oscar one of the people who works at the center walked right into the room and had Dulce pinned to the wall by her throat, Livie protected Dulce and she got a bruise on her arm because Oscar grabbed her.Ocean was late for the first visitation day and he showed up with hickies on both sides of his neck. Livie was so upset by it and she needed to go back to her room to get her brace and Ocean went with her and asked her what happened and she wouldn't tell him. But he put it together when Oscar showed up at Livie's door. Livie and Dulce were released on the same day and Dulce went home with Livie, Ocean, and Law.

Livie will fight with all her power to keep her relationship with Ocean. Dulce is Livie's friend and roommate, she doesn't trust guys easily. Law has found the one that he wants to be with in Dulce, beat up Ocean the next day after Ocean hurt his jaw. Ocean started doing coke again when Livie went into rehab, he seems very scared that he is going to loose Livie, he made her promise that if she met someone in rehab that she would go with him. Layla the one who was taking care of Livie, says that Livie is part of the family. Unk- is Ocean's dad, Law's uncle and Layla's brother. Santi is Livie's physical therapist. Oscar is mean, gross and he shouldn't be working at the rehab center he prays on the innocent victims.

This is an amazing it fit right in with the first book. I again I couldn't put this book down. I loved it. I loved how Law met his one and that he is going have to work to get her. I also loved that all the characters were very well developed. I loved how M.A. DeOlmos style of writing and I look forward to reading more of her books. I can't wait for the third book to this series because I really want to know what happens next. I found this author she is know one of my favorites and if I could give this book more then five stars I would. I highly recommend this book to anyone who has read the first book.

My name is Melissa DeOlmos, an aspiring author and a newbie to the world of indie writing. I live in sunny side Palm Bay, Florida with my two lovely crazies ages five and two, along with my Law Enforcement champ of a husband.
I could say that writing novels has been a passion that I’ve always pursued, but I can’t. Writing for me has always been my own secret escape into a land of wonders and opportunities. Filled with love and so much trouble, I sometimes wonder if I need medication for the stories that pop into my head.
I have now decided to share my mystical mind and stories with the world so, hopefully, others may also find that little something extra they’ve been looking for within my stories. Thank you and I hope you enjoy my books.