Review of "No Regrets" By: Jess Bryant 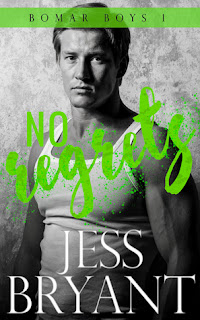 The Bomar boys: bad through and through or so their reputation goes.  Cash has spent his life being a punch bag for his good for nothing dad, alongside his twin brother Colt.  His is always trying to shake the Bomar reputation and is trying to do things the right way.

Jemma is the one that got away but now she's back after escaping from an abusive relationship.  Cash still has a dark side to him as the anger bubbles beneath the surface.  Will she give him another chance or will he scare her away with his darkness?

Cash has very much a sweet side to him that Jemma brings out of him.  But this has always been there as he has always put his brother first.  There was certainly less bad boy about Cash than I was expecting but this is actually remarkable considering his childhood and the influences around him.  Whilst Jemma has been through a traumatic time that doesn't quite go away, the focus remains more on Cash and his struggles.

It was still a really good engaging read that had me wanting more from the Bomar boys.