Liam Knight, a sexy panty-melting, hard-bodied streetfighter and renowned tattoo artist, is rising up the ranks of the UFC Middleweight Division, but he’s about to get knocked out by his past.

Quinn Kelley is a semester away from becoming a college graduate when her mother’s death sends her spiraling, forcing her to go back to her hometown and a past she can’t outrun.

Nearly a decade ago, Liam and Quinn fell in love while surviving on the city streets together, but they were torn apart by one irreversible night. Now each has moved forward without the other, but like a tattoo on the heart, absolute love creates a lasting burn.

Quinn has kept a tight rein on her emotions, but with the passing of her mother, the foundation she’s built begins to crack. Will seeing Liam again crumble her fortress to the ground, uncovering the flame that still burns? Or will it extinguish the fire forever?

Liam’s tough exterior and resentful demeanor hides more than a wounded heart. He’s tormented by guilt over what happened to Quinn—and the secret he kept, even from her. But revealing his secrets would require unearthing the all-consuming monster he keeps caged in the darkest part of his soul, the one that threatens to devour him.

When they’re given a second chance, will they let go of their fear and pride and let the flame between them become one?

Or will the heat burn them both? 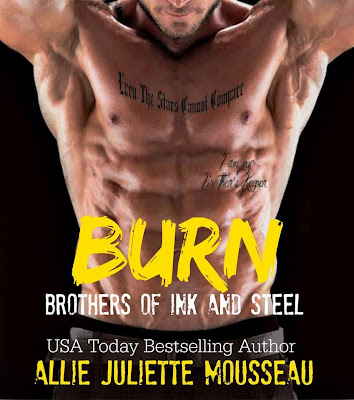 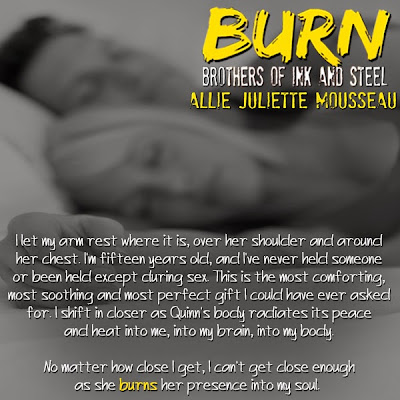 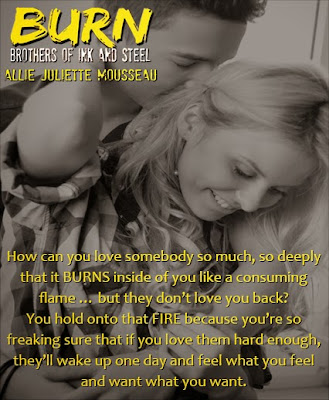 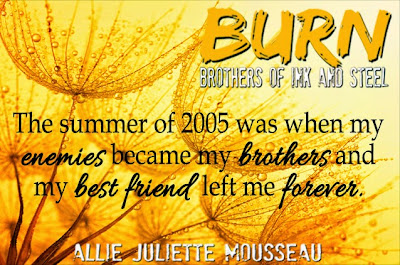 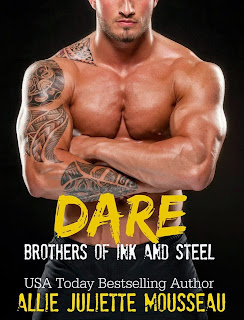 Allie Juliette Mousseau is a USA Today Bestselling author.
She can always be found writing, playing in puddles with her children, hiking with her husband, or adventuring somewhere in the world. Her favorite place to write on warm days is outdoors, but when the weather gets too cold, she'll be inside at her desk inspired by the mountain view from her home office in Montana where she lives with her loving husband, children, and golden retriever. She loves to travel and lived for three years in her RV with her family while visiting the national parks and forests of the U.S. and a couple Canadian provinces. She is excited to add all of Canada and Alaska in the near future!
Sign up for Allie's Newsletter: http://goo.gl/Oyw8G2