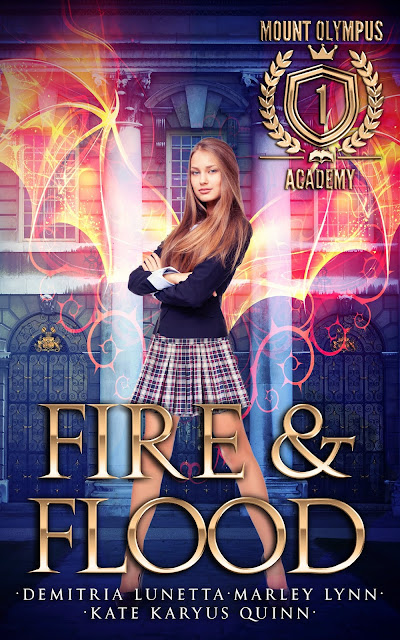 Revenge. That's why I decided to join the assassination class at Mount Olympus Academy. A monster killed my father and grandmother - and I'm going to make them pay.


But first I have to learn how.
I'm Edie. Once I was just a normal girl with asthma and a bad back. Now, though, I'm at a school taught by Greek gods. My classmates are vampires, witches, and shifters. We're all training to fight in the war between the gods and monsters.
There's also...Val. He's a vampire, but he's different from the others. Plus, he's got secrets too.
I get secrets. The wings that sprout from my back were hidden from me my entire life. I also sometimes breathe fire. But no one - including me - can figure out what I fully shift into. Honestly...a part of me doesn't want to know.
But if I'm going to avenge my family, I need to figure it out before I flunk out.
Fire & Flood is a young adult magic academy fantasy novel with non-stop action. It contains a spunky heroine, one best friend with the gift of sight... to see tomorrow's lunch menu, a mean-girl vampire roommate with a carnivorous plant, and a meet-cute with her roommate's hot twin brother that almost kills them both.
Percy Jackson meets Vampire Academy in this fun new trilogy! Classes start now - one-click to enroll with Edie in the assassination class! 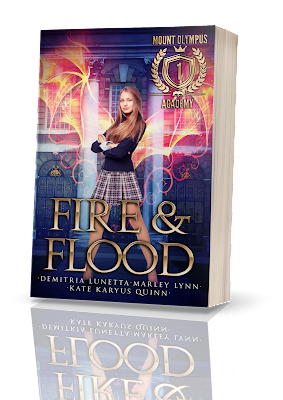 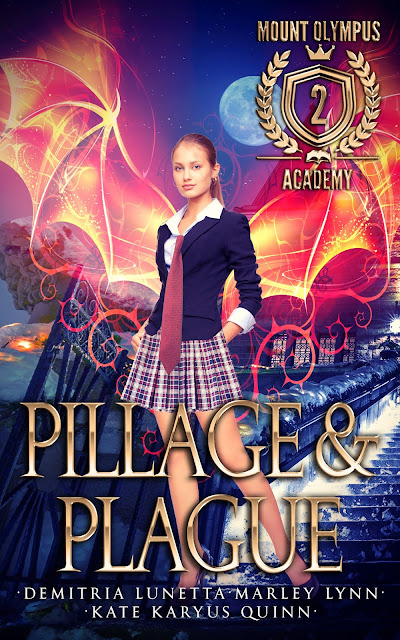 Turns out-I'm a stone-cold killer. And I'm not sure I like it.
Last school term I figured out I was a dragon shifter. And then I killed a bunch of monsters. It was to save my friends...but also I kinda liked it. Or my dragon did.
Now, it's summer term at Mount Olympus Academy. Besides classes I also need to: find my mom, rescue my best friend, and help figure out a cure for the shifter plague that's sweeping across campus.
Talk about a heavy course load!
My personal life isn't any easier. Even though my vampire crush, Val, brought his fiancee back to school with him - I'm the one he's kissing.
Val isn't my only boy problem. There's also Nico, a one-eyed werewolf who's been tortured by the monsters and has a major alpha thing going on.
On top of that we have a new professor. With her searing, charismatic speeches, Maddox Tralano has MOA students ready to follow her into battle.
The drumbeat of war is growing louder, soon everyone will be forced to fight for their lives. Because when gods and monsters battle it out - there is no middle ground.
Pillage & Plague is book 2 in the Mount Olympus Academy trilogy. This young adult magic academy fantasy novel features: non-stop action, lots of hot shifter boys, Val the mysterious vampire, girls who are best friends forever, and lots of plot twists to keep the pages turning.
Percy Jackson meets Vampire Academy in this fun new trilogy!
Healers, trackers, spies, and assassins all welcome. One-click now to enroll with Edie in the summer semester at MOA! 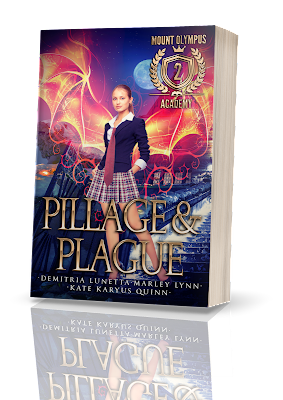 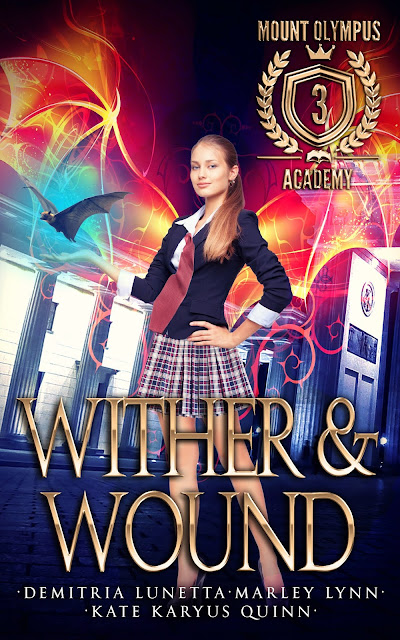 I've turned traitor and spy. By the end of this, someone big is gonna die.
I hope it's not me.
My sister, Mavis, is going to be put on trial. Mr. Zee is certain to find her guilty of helping the monsters in their war against the gods. And then he'll kill her.
I can't let that happen.
So when I find out about a sword capable of wounding him, I set out to the collect the pieces.
With the sword in hand, I'll convince him to step down and free Mavis.
Or get killed trying.
My time at Mount Olympus Academy is coming to an end. The only question is, whether I'll exit the gates dead or alive.
Wither & Wound is book 3 in the Mount Olympus Academy trilogy. This young adult magic academy fantasy novel features: non-stop action, lots of hot shifter boys, Val the mysterious vampire, girls who are best friends forever, and lots of plot twists to keep the pages turning.
Percy Jackson meets Vampire Academy in this fun new trilogy!
Healers, trackers, spies, and assassins all welcome. One-click now to join Edie for her last term at MOA! 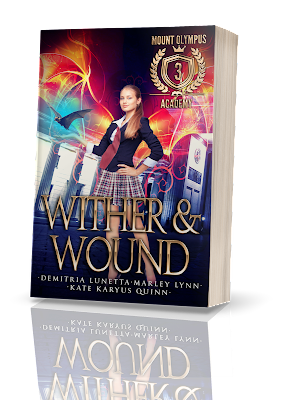 Killing With Your Bare Hands is in a room that is half classroom, half gym. Cassie and I take a seat near the back while the other students seem to already have their cliques. Of course, it is halfway through the term. Tina is surrounded by a whole gaggle of girls with resting bitch face.
The class is taught by an extremely tall, very hot, very shirtless man who introduces herself as Kratos.
I turn to Cassie and jerk my head in the teacher’s direction. “Mr. Kratos?”
“Drop the Mr. He’s just Kratos.”
“Okay, but Kratos…he’s a god, right?”
“Demi-god, technically,” she whispers back. “Of war.” Her eyes widen dramatically, like she finds this both scary and exciting.
I guess that also sums up how I feel about this dude—er, god. I can’t seem to rip my gaze away from his bare torso. Golden skin covers bulging muscles. So. Many. Muscles. He is definitely a badass. He has it written all over himself. Like literally. It’s tattooed across his back.
He sidles past my desk, giving me a little smirk to let me know he saw me checking him out. Then he tells us to open our books to page three hundred and five. It’s a chapter titled, “They’re Not Actually Dead Until They Piss Themselves.”
“Alright, who wants to walk us through strangulation?” Kratos asks.
Almost everyone immediately raises their hands. Great, so not only is this the most difficult course, but it’s full of overeager super achievers. Kratos skims over the extended arms and then does the classic teacher thing of picking a guy at the back who seems more interested in studying the ceiling.
“Val,” Kratos nods to him. “Please come to the front of the classroom.”
The boy stands and for the first time I miss my inhaler. This school is overrun with extremely good-looking people, but there’s something about Val that’s more than just pretty. He walks to the front, all liquid and smooth, like he’s not made out of flesh and bone. I realize pretty quickly he might not be. I have to remember I’m not in high school anymore—I’m at Mount Olympus Academy. He’s got his uniform a little bit punked out, like my roommate Tina, but he’s wearing a t-shirt with a cute bunny rabbit under it, which feels very not-vampire to me.
“What is he?” I whisper to Cassie.
“And for your victim,” a hand settles onto my shoulder, heavy and squeezing more than necessary. “The new girl, who likes to talk during class.”
Everyone giggles. Even Cassie, although I’m starting to realize it’s her auto-response to everything. Kratos propels me to the front of the class, while I fight the urge to adjust the back of my skirt and make sure I didn’t tuck it into my underwear when I used the bathroom.
“Hi,” I say to Val when I get up to him, and he nods, using the motion to both acknowledge me and toss a shiny black curl out of his eyes.
“Hey,” he responds, his voice low and slightly rumbly. The last thing I need is some dumb crush—especially after my last one ended so badly. And yet with just that one word I can feel the fascination forming. My eyes latch onto his shirt, which is a sunny yellow. This close, I can read the words printed above the trembling rabbit, which say, Inside I’m just a scared wittle bunny wabbit.
“Your shirt is great,” I say, nervously.
“I know,” he agrees in a way that is both dickish and inexplicably attractive. I frown as the shivers travel down my spine. I refuse to fall under this guy’s spell. And that means no more sweet little Edie. I’m in the assassination class now. I need to be a badass.
“Not that you care, but I’m Edie.” Okay, that was more passive aggressive than badass. I’ll have to keep working on it.
“No,” Val replies with another hair flip. “You’re dead.”
And then I’m in the air—not because my wings are out, but because Val’s got my neck in one hand. 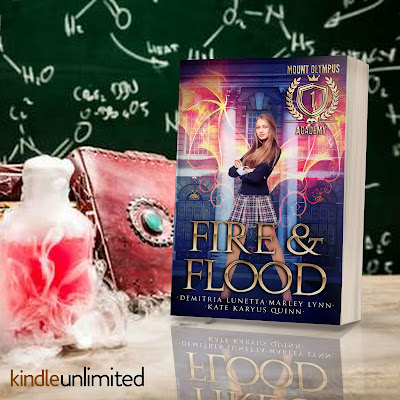 DEMITRIA LUNETTA is the author of the YA books THE FADE, BAD BLOOD, and the sci-ﬁ duology, IN THE AFTER and IN THE END. She is also an editor and contributing author for the YA anthology, AMONG THE SHADOWS: 13 STORIES OF DARKNESS & LIGHT. Find her at www.demitrialunetta.com for news on upcoming projects and releases. Or join the newsletter list for DEMITRIA LUNETTA
KATE KARYUS QUINN is an avid reader and menthol chapstick addict with a BFA in theater and an MFA in ﬁlm and television production. She lives in Buﬀalo, New York with her husband, three children, and one enormous dog. She has three young adult novels published with HarperTeen: ANOTHER LITTLE PIECE, (DON'T YOU) FORGET ABOUT ME, AND DOWN WITH THE SHINE. She also recently released her ﬁrst adult novel, THE SHOW MUST GO ON, a romantic comedy. Find out more at www.katekaryusquinn.com and make sure you’re receiving newsletters from KATE KARYUS QUINN
MARLEY LYNN is a lost child of the gods, who waits on the shores of Lake Erie for her parents to bring her home. In the meantime, she contents herself with reading, writing, and gardening. Find out more at www.MarleyLynn.com or sign up for MARLEY LYNN’S newsletter.