Becoming His Master by M.Q. Barber

From rescue to romance…

Teach a wounded submissive the value of his service. The task ought to be an easy one for an experienced dominant like Henry Webb.

But novice Jay Kress challenges his teacher like no other. Still bearing the bruises of an encounter outside the bounds of safe consensual play, Jay is desperate to submit to the man who saved him—and shamed by his desires.

Henry recognizes the dangers of a relationship built on hero worship. He’ll teach Jay how to stay safe, that’s all. He won’t take advantage of the younger man’s trust. He won’t share his fantasies about his dark-haired, athletic student. He’ll never claim this submissive for his own... 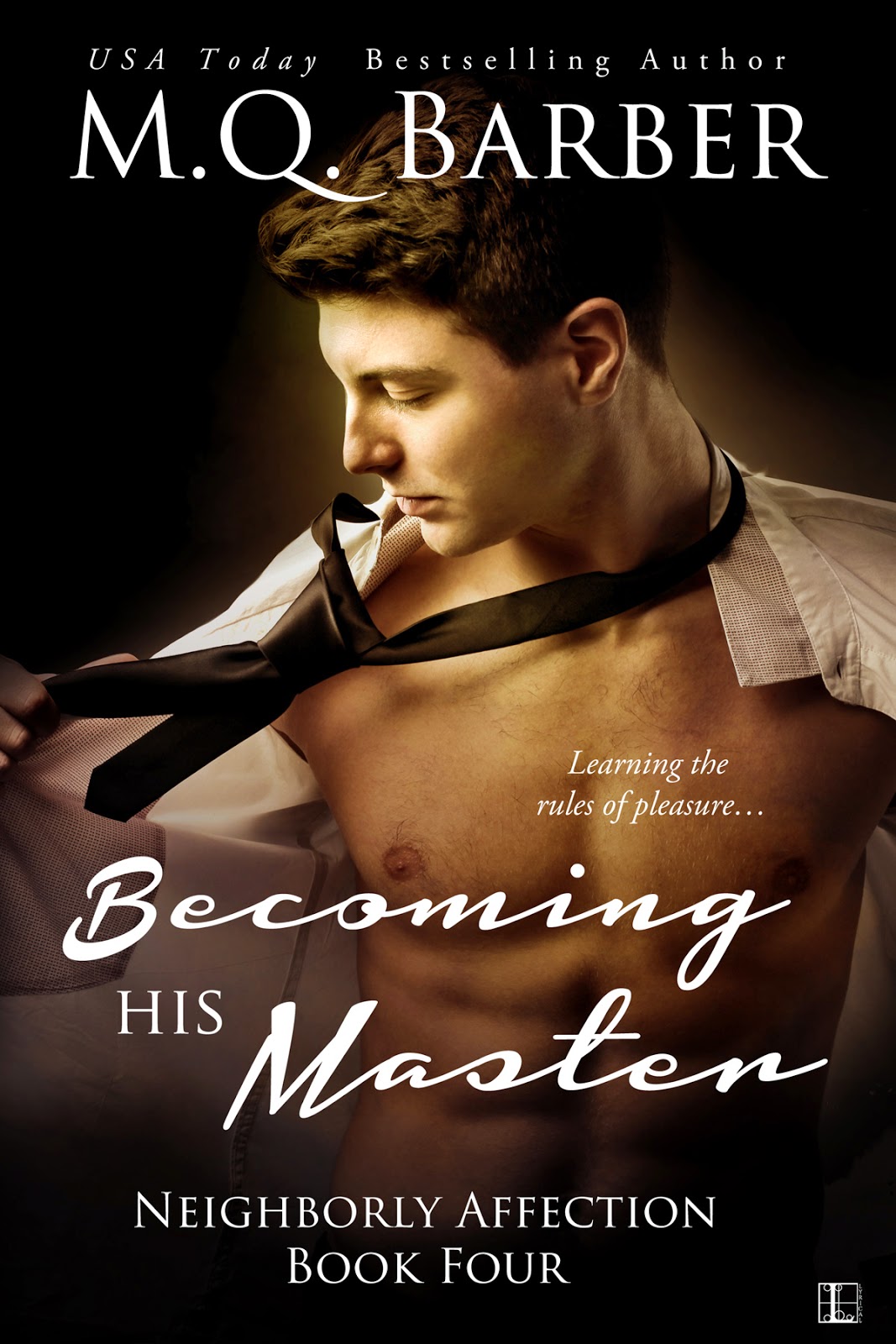 Henry’s watch showed quarter to eight as he mounted the stairs toting carryout meals for himself and his submissive. The hour found the second floor a modest hive of activity as players donned their preferred personas and headed upstairs to the sandbox. Eventually, he too would join the procession, with Jay in tow. For now, he turned right and stepped through the wide double doors into the salon.

The area set aside for himself and young Mr. Kress showed Emma’s unmistakable influence. Tucked into the farthest corner of the room, a three-panel screen of wood and fabric created a private dining nook. Best pray the younger man didn’t recognize the scenes depicted, though the intent shouted for all and sundry to pay heed.

A pair of yellow-ribboned women cast admiring glances his way. Muting his growl, he stepped past them with a curt headshake. Won’t interfere, my ass.

A paean to Greek mythology and literature graced each panel. Achilles and Patroclus circled each other with shields and spears, their sandaled feet the only flesh not on view. Apollo strummed his lyre while a boy—Hyacinth, given the field of flowers—lay at his feet. Beautiful Ganymede proffered a cup beneath the sheltering wings of Zeus-as-eagle.

Stalking across the room, he considered the ready excuses sure to be on Emma’s lips. A shield to keep the boy from prying eyes, lest his table manners prove less than impeccable. Hadn’t he himself insisted on protecting Jay from possible criticism? No, of course the scenes hadn’t been deliberate. Convenience had dictated the choice. In no way had she meant to imply Jay Kress was his eromenos.

His beloved boy. His to mentor and protect. His sweet lips to kiss, his beautiful thighs to fuck.

Cock pressing at his fly, he swore in silence. Was there no mercy to be found?

He rounded the screen.

Jay sprang to his feet.

No. No mercy at all.

Despite Emma’s claim, his student wore a suit as well as he wore leather shorts. Temptation beat at him, an unrelenting pressure, the image of his submissive on his knees with the same earnest delight on his face.

He forced himself to turn and deposit the bag on the table. Slow and easy.

“You’ve set a lovely table.” He told himself navy wasn’t Jay’s color, despite the good sense he’d shown to pair his suit with a solid white shirt and a pale blue tie with a diagonal thin-stripe in white. “I trust your wait has been a pleasant one?”

“Yes, Master Henry.” Jay stood straight and tall, a slender vision of grace. “Mistress Emma showed me what to do.”

“It’s just Emma, my boy. No title. She’s a submissive here, as you are.” He unpacked the tote. Salads first, the light containers atop the others.

“But she’s in charge of things.” Jay tilted his head. He started to roll his shoulders before stopping himself.

Warm foil container deposited on the table, Henry paused in his work to study his submissive with more care. “Yes, she handles some functions at the club.” The neat half-Windsor had to be Emma’s doing. “She also submits to her husband.” Likewise, the white rose boutonniere pinned with Jay’s red ribbon, the symbol of his ownership. The younger man’s purity and innocence bound under his protection and control.

“Tell me, how many pins did it take until Emma was satisfied with the drape of your jacket?”

“I’m not sure, Master Henry.” Jay half-smiled, his eyes shining. “She made me stand still for a long time, though. Do you like it?”

With such an enticing invitation, he smoothed the fabric from the lapel to the right shoulder.

Jay caught his breath and rocked his hips.

“Quite handsome,” he murmured. Such promising responses his pupil gave, eager physicality impossible to miss. “But you cannot relax, can you? Afraid you’ll disrupt her handiwork if you so much as breathe too deeply.”

“I don’t mind, Master Henry.” If you like it, he didn’t say, though the worship in his gaze made the words unnecessary.

Humming, he traced the edge of the lapel downward and unfastened the button holding the jacket closed. “I mind.” Hanging the jacket on the chair back wouldn’t do any harm. “Your comfort is my responsibility during our time together.”

He pushed the coat from the boy’s shoulders. He’d remove his own to ensure his dinner partner felt no awkwardness.

“No, no, please.” Jay clutched at the fabric, fighting the motion, his voice rising. “Master Henry, please.”

What the devil was he—

He knew the instant their lips touched he ought not have done it.

Soft and pliant, the younger man opened his mouth with a throaty little whimper.


Irresistible. A possessive haze descended, snarling heat pushing out from his center. He ground his cock against his submissive and claimed his mouth. 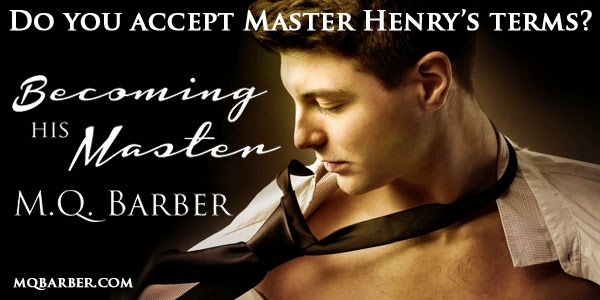 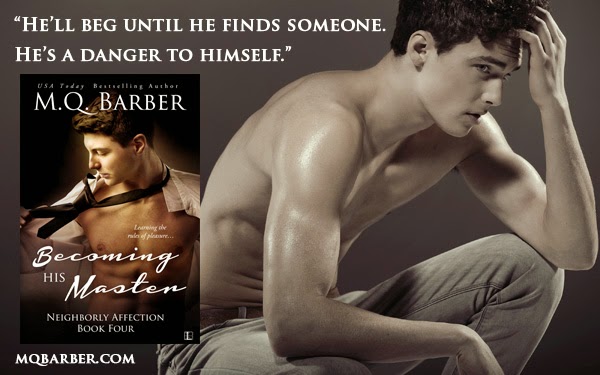 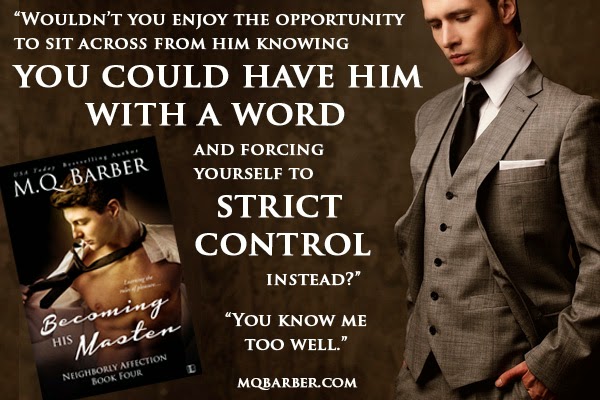 This was my first read in the Neighborly Affection series but it won’t be my last. Told entirely from the viewpoint of Henry Webb, it follows his interest in, and training of, Jay Kress.

Jay is a newcomer to the BDSM scene and has not learned the lifestyle rules and, as we find out, really doesn’t understand his own needs. While he must do that before he can truly become part of the culture he must also learn to protect himself emotionally and physically. After Henry was forced to intervene in a scene that found Jay physically wounded, the experienced Dom is determined to take Jay under his wing before he is hurt any further. The clock is ticking as Jay’s abuser will be returning to the club in a few short months. Henry is determined to have Jay fully trained by that time. Jay should be able to admit his own desires in a safe, supportive way while also ensuring his own personal safety. Henry will not accept anything less.

I was able to read this story without having read previous titles in the series but I know I would have enjoyed it more if I understood more about the main, and secondary, characters. Told entirely from Henry’s point of view I do get a sense of whom and what drives him but the rest of the characters are known only by their actions and conversations. This is not enough to get a full picture though certainly has me wanting to learn more. The story is well-written and the insight into the lifestyle is tantalizing. I ache for the vulnerability and innocence of Jay as he tries to find that elusive something that he doesn’t seem to understand himself. Feeling as if his own wants are somehow shameful, he hides his own desires behind other’s needs. Henry is determined to deny his own feelings for his protégé. Watching Henry’s interest change from a forced distance to complete engagement is a treat to watch. There is no cliff-hanger but we know there is more to come in their story.

Ending with the first chapter of the next book in the series, Henry and Jay’s story continues with the addition of an interesting new neighbor in the next installment. That chapter was a great teaser and has me eagerly awaiting the next title! I will be going back and finding the earlier books in the series while I am waiting.

USA Today bestselling author M.Q. Barber likes to get lost in thought. She writes things down so she can find herself again.

She has a soft spot for romances that explore the inner workings of the heart and mind alongside all that steamy physical exertion. She loves memorable characters, witty banter, and heartfelt emotion in any genre.

The former Midwestern gal is the author of the Neighborly Affection contemporary romance series. Pick a safeword, grab a partner or two, and jump in.