Knights In Time by Chris Karlsen

KNIGHTS IN TIME
by Chris Karlsen 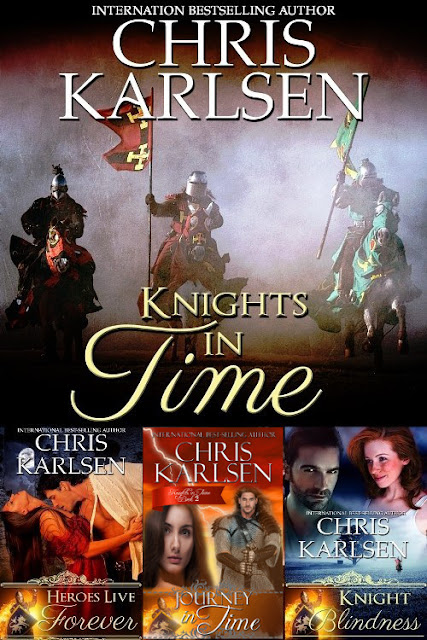 Elinor Hawthorne has inherited a house haunted by two medieval knights, Basil Manneville and Guy Guiscard. Basil is literally the knight of her dreams. She never expected to “meet” a ghost face to face let alone fall in love with one. Living the normal life together that they’d want is impossible unless fate intervenes.

A lifetime later fate does intervene. Basil, still in love with Elinor, is told her spirit lives on in a young woman. He is given another chance at life to find her.

“Did you see a ghost or not?” Elinor asked.

“I don’t know,” Lucy said at last and glanced around the room again. “I’m not sure what I saw.”

A gust of wind ruffled the sheer curtain behind Lucy, the hem brushing her elbow. She screamed and bolted past Elinor, down the stairs.

“It’s only the breeze,” Elinor called after her, but Lucy continued her dash for the kitchen.

Unafraid, Elinor walked around the bedroom. She dragged her hands over the newly plastered walls as she circled the room. It had needed a brighter and fresher look. The paint and repair work on the house was one of the first things she did after inheriting the manor.

Elinor checked the bathroom and second bedroom. Like her bedroom, everything seemed normal. At the top of the stairs, goose bumps suddenly dotted her skin and the hair on her arms stood on end. Weird. She glanced back, but didn’t see anything strange, or more to the point, Lucy’s ghost. She shrugged and continued down.

The budding romance between London attorney, Shakira Constantine, and her client, Alex Lancaster is put to the test when the couple finds themselves torn through time back to the medieval world. It’s a world Alex has a strong connection to, a connection that will cost him his life unless they can find a way to return to this time. Without him, Shakira is condemned to live in a dangerous medieval world alone.

Together they’ll struggle to discover a way back to the modern world while dealing with the political and social intrigues of 14th Century England. The intrigues of that world all too often work against their efforts to get home.

She had to be on the grounds. She wouldn’t venture far. He walked the corridors stopping anyone who might’ve seen her. He questioned the kitchen servants. None that day served her meals. No one had seen her since the previous night’s banquet.

Alex returned to their chamber afraid something terrible happened. Worse, he had no idea who else to ask. A chill breeze blew through the window and whipped at this cloak. Shakira wouldn’t leave the window open in this weather. Wherever she disappeared to, she left in a hurry. He noticed her clothing trunk missing. She didn’t disappear on her own. Someone knew what happened. He rushed from the room determined to get the answer.

Stephen Palmer, a wounded medieval knight finds himself torn through time from the battlefield to the modern and alien world. Seriously injured, he now must make his way in a world he has no context for and no knowledge about.
Esme Crippen is hired as his tutor. Love is something he does understand and as the two fall into love, they both must overcome the fact the world thinks him mad with his time-travel talk, including Esme.

Three days had passed since the battle. Why had they let him live? There could be no good reason for it.

“This is Dr. Berger. Do you remember me speaking to you two days ago about your eye surgery?”

“Dr. Monette is here too. We want to talk to you about the day they found you. The more we know about you, the more we can help.”

“Who is the woman?” She didn’t sound like the first woman, the one who smelled like a garden. This one carried no scent of any flower. Nor did she sound young as the bawd. What was this one’s purpose? The first, he suspected, had created the potion that put him to sleep. He knew a bawd’s.

“She is Nurse Cloutier.”

Probably Witch Cloutier. “Ask what you will.”

“What is your name?”

“What’s the last thing you remember before receiving your injury?”

“I am a knight in service to the Baron Guiscard. He rode to the aid of his friend. I saw your men surround the baron. They were trying to pull him from his mount. I was about to ride to his aid when one of your knights, his heraldic symbol was of a panther on a field of orange, challenged me.” Stephen thought again how Guy’s warning had made him falter. “I...I hesitated and your man struck with his sword.”

“Monsieur Palmer, your eye injury is serious. If this answer is an attempt at humor, then it is a poor time to engage in such a jest.”

“You asked what I remembered. I told you. I’m not in the habit of making jests with my enemies.”

“Monsieur Palmer, we are not your enemy. We are not at war.” A long moment passed and then Berger asked, “What year do you believe it to be?”

“From what the paramedics told us you said when they arrived, and your answer today, I am convinced that you do believe this is 1356. Monsieur Palmer,” Berger covered Stephen’s hand with his own. “The year is 2013.” 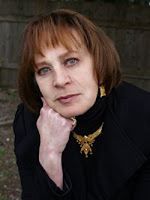 Chris Karlsen is a retired police detective. She spent twenty-five years in law enforcement with two different agencies. The daughter of a history professor and a voracious reader, she grew up with a love of hisotry and books.

An internationally published author, Chris has traveled extensively throughout Europe, the Near East, and North Africa satisfying her need to visit the places she read about. Having spent a great deal of time in England and Turkey, she has used her love of both places as settings for her books. "Heroes Live Forever," which is her debut book, is set in England as is the sequel, "Journey in Time," the third is "Knight Blindness." They are part of her Knights in Time series. All three are available as a boxed set on Kindle. She is currently working on the fourth in the "Knights in Time," series. "Golden Chariot," is set in Turkey and the sequel, "Byzantine Gold" is set Turkey, Paris and Cyprus. They are part of her Dangerous Waters series.

Her most recent release is called, "Silk" and is book one of a new series, The Bloodstone Series. It is a suspense set in Victorian London.

Published by Books to Go Now, her novels are available in digital, ebook, and Android App. and in paperback. "Heroes Live Forever" is also in audio format.

A Chicago native, Chris has lived in Paris and Los Angeles and now resides in the Pacific Northwest with her husband and four rescue dogs. A city girl all her life, living in a small village on a bay was a interesting adjustment. She'd never lived anywhere so quiet at night and traffic wasn't bumper to bumper 24/7.