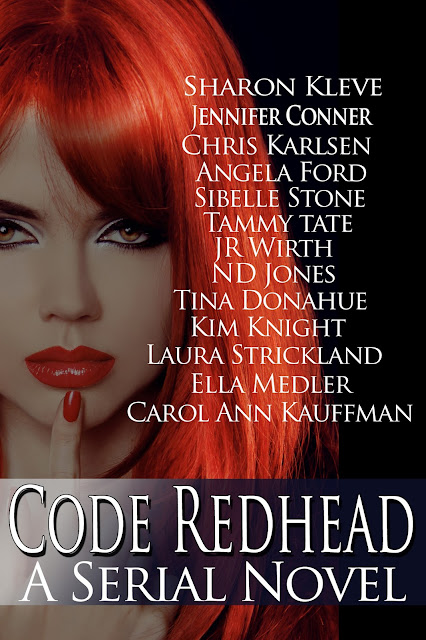 Books To Go Now will donate the proceeds from the sale of the Novel to The Children’s Cancer Research Fund.

Ambrosine Dubreauil owns Who Do Voodoo, a voodoo shop on Bourbon Street in New Orleans that her grandmother left to her.
Her life is quite, calm, and relaxing until the sexy Remy LaCroix charms himself into her life and heart.

As a plant chemical biologist, Aiven, always has her mind buried in her work. When her co-worker talks her into going out for a night of fun Aiven reluctantly agrees.
Coleman just wants to spend the night with a pretty girl and forget about the brutal underworld where he's an undercover cop.
Neither expects death to be waiting around the corner when Coleman and Aiven get pulled deeper into danger and life on the run.

It's 1945 and the world is at war. An American Marine on leave in Melbourne, Australia, a pretty red-haired big band singer, and one of Glenn Miller's greatest songs come together for a weekend. In their brief time, they find love in the chaos of war.

The tears came. Some days in waves. She realized it was okay to cry, not to cry, and that time doesn’t heal all wounds. Grief changed Maya Delcort.
After her sister’s death, she disconnected from the world she knew, and the man she loved. Maya’s new world became the CIA, as a covert operations agent.
An assignment takes her to Ireland with only one contact; a man she never met. Maya only knows him as Blue; he only knows her as Red. When her identity gets jeopardized, and Blue isn’t answering; she fears the worst. Emotions run high, danger lurks, and she realizes she’s ready to love again.
Will Maya escape death and find love?

Tatiana Langdon is an heiress, which makes her a target for many bachelors in Gilded age New York. The fact that she’s beautiful, educated and from one of the oldest families in the city isn’t as important to many of the men as the millions she’ll inherit when she marries. When she meets Merritt Barclay, she knows he’s different from the other men who are pursuing her but her Aunt Olivia is doing everything in her power to prevent Tatiana from getting to know the handsome man.
Merritt Barclay loves a mystery and something happened years ago to cause a rift between his family and Tatiana’s. It involves her Aunt Lorelei and his father, but no one in either family will divulge the secret. Merritt joins forces with Tatiana, a young woman who has bewitched him with her beauty and intelligence, to discover what happened.
But Tatiana’s aunt will do everything in her power to keep the couple apart, and as their attraction grows stronger, the danger rises. What lengths will some people go to in order to keep a family secret?

Ten years after a nasty breakup, Tara and Ryder surface for a class reunion and when Tara gets struck by lightning, all memory of Ryder vanishes. Will Ryder use it to his advantage to win her back?

DAY OF THE DEAD by JR Wirth
Genre: Suspense/Thriller

Two adolescents find themselves on a hunt for their friend, Cali, after she is abducted, on Halloween, by a psychopath who kills on “Dia De Los Muertos” (Day of the Dead).

Jackson Glory introduces his Serenitarian wife, Nevaeh, to an old Earth custom—hot and sexy for some, not enough for others.

When the lights shine bright, and the city is lit up, Rita Lane will show you a good time.

THE CLUE OF THE RED TRESSES by Laura Strickland
Genre: Time Travel Romance

Chasing a beautiful thief through time, Stephen Longstreet never imagines the peril he faces—Nazis, ancient Britons and courageous Bridie Maguire, who might just steal his heart.

In a dysfunctional society where 'bottle' redheads are the height of fashion, real redheads host a gene that protects them from brainwashing. Two men fight to rescue a redheaded girl, for different reasons. The guard because he loves her. The scientist because he wants to give the human race a way to rebuild and take itself out of its brain-dead slavery.

Sarah works for an organization that fixes broken timelines in history. She has a very special skill set involving time travel. Her mission is to save the life of Lucas, a young man who will be pivotal in the progress and advancement of his planet.

Sharon Kleve was born and raised in Washington and currently lives on the Olympic Peninsula with her husband.
Sharon is a multi-published author of contemporary romance. She loves romance. She loves reading romance, living romance, and especially loves writing about romance. She gets no greater feeling than watching her characters come alive in each other's arms. Most of all, she loves giving her characters the happily ever after they deserve—with a few bumps and bruises along the way.

Jennifer Conner is a best-selling Northwest author who has over eighty short stories and books in eBook, print, foreign language editions, and audiobooks. She writes in Christmas Romance, Contemporary Romance, Paranormal Romance, Historical Romance, and Erotica. She has hit Amazon's top fifty authors ranking, and her books have been #1 in sales.

Chris Karlsen I was born and raised in Chicago. My father was a history professor and my mother was, and is, a voracious reader. I grew up with a love of history and books.
I am a retired police detective. I spent twenty-five years in law enforcement with two different agencies. My desire to write came in my early teens. After I retired, I decided to pursue that dream. I write three different series. My paranormal romance series is called, Knights in Time. My romantic thriller series is Dangerous Waters. The newest is The Bloodstone Series. Each series has a different setting and some cross time periods, which I find fun to write.

Bestselling Romantic Suspense & Contemporary Romance Author, Angela Ford originates from Nova Scotia...Canada's Ocean Playground! Her love of the ocean and sunsets are always in her heart and give her inspiration. Her love for words keeps her turning the page. She is never without a book, whether she's reading or writing. Her dedication to volunteer and involvement with cyber safety seminars gave her an Award of Distinction and sparked the idea for her Cyber Crime series. In between mysteries, Ms. Ford writes short contemporary romance...sometimes sweet...sometimes spicy...and sometimes with a dash of suspense!

Sibelle Stone is the pseudonym for award winning historical romance author Deborah Schneider. Sibelle writes sexy steampunk and paranormal stories, filled with mad scientists, dirigibles, automatons, and fantastical creatures. Between them Deborah and Sibelle have published six books and two novellas. In her spare time Sibelle enjoys dressing up in Victorian ensembles, modding play guns into something that looks a bit more sinister and wearing hats. She owns some very nice hats!

Tammy Tate was born and raised in Hollywood, Florida but has lived most of her adult life in Texas. Her passion to write began in high school. It follows her everywhere she goes...creating a world where anything is possible. She's been married to the same wonderful man for over thirty years. Her secret to a long marriage? It's easy when you marry your best friend. In her world, Friday night is still date night.
Since she believes reading is the next best thing to writing, she enjoys romance, fantasy, science fiction and thrillers. In December of 2013, she signed her first book contract with a traditional publisher. Her books have made Amazon's Best Seller list.

JR Wirth is a practicing psychotherapist, which helps provide insight into the human mind and condition, and gives him a strong understanding of the emotions of a moment in time, as well as the inner workings of his characters. JR has several pieces published—including a poem and several short stories in online venues.
In all of his works, J.R. combines ordinary people with extraordinary circumstances, to create characters that jump off the page and straight into the readers’ heart and psyche. He remains dedicated to the craft of writing, highlighting the conflict, frailty, and hero in all of us.

Kim Knight is 34, and from London in the UK. She’s a qualified teacher and mother to a beautiful toddler. As a reader, she’s head over heels in love with romance, historical fiction, crime fiction, African- American, suspense and thriller genre books. A Stranger in France (republished January 2017) is her first romantic suspense novel. Her second romance novella Not Just for Christmas was published November 2016. At present Kim is writing her third thriller novel, to be published in 2017. As a writer, Kim enjoys creating stories within the romance, romantic suspense and general thriller genres. Kim also writes beauty and book related articles for Love Life, Live Magazine. When she’s not reading, or writing stories of her own, her other passions include practising her French, fashion and spending time at her sewing machine dress making. Watching make –up and beauty tutorials on YouTube, letter writing and being a mum.

Award winning author Laura Strickland delights in time traveling to the past and searching out settings for her books, be they Historical Romance, Steampunk or something in between. Born and raised in Western New York, she’s pursued lifelong interests in lore, legend, magic and music, all reflected in her writing. Though she’s made pilgrimages to both Newfoundland and Scotland, she’s usually happiest at home not far from Lake Ontario with her husband and her "fur" child, a rescue dog.

Ella Medler is a U.K. author and editor. She writes fiction in many genres in a seemingly vain attempt to slow down her overactive brain enough to write non-fiction on subjects she knows a thing or two about. She also does not believe in the starchy use of English and ignores the type of rule that doesn’t allow for a sentence to be finished in a preposition. Her books are action-driven, and well-developed characters are her forte. Loves: freedom. Hates: her inner censor.

Carol Ann Kauffman is the author of eighteen books to date, from short stories to full-length novels. Her novels, classified as romantic action adventures with a sci-fi/ fantasy twist, and mysteries. They’re about life, love, loss, and lunacy. She is a retired teacher from a local school district in Ohio, where she taught for thirty-five years. She has worked as a printer, managed a department store office, worked as an insurance agent, and worked in the hardware and automotive departments of a large store. She was a Red Cross volunteer. Carol loves to travel; her favorite places being Italy and Aruba, which show up in her novels quite a bit. She loves to play Bridge and to garden. She grows African violets and orchids. Carol loves dachshunds and trains.