Cover Reveal for Beneath Your Beautiful by Emery Rose 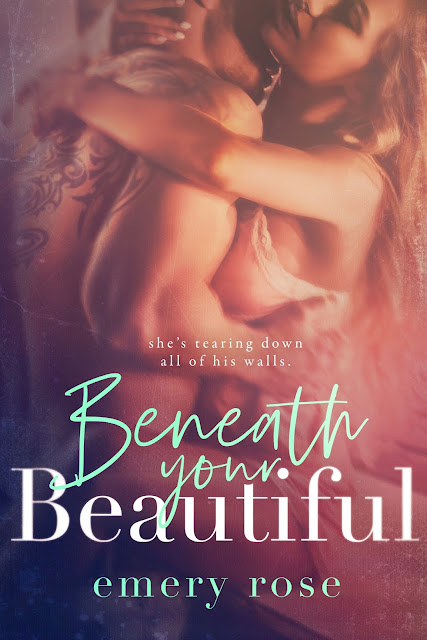 EDEN
All I wanted was a fresh start in a new city ... and a bartending job. I never intended to fall for the sexy, tattooed bar owner.
Dark.
Brooding.
Emotionally unavailable.
Killian Vincent is a challenge I can’t seem to walk away from.
He’s afraid that if I dig too deep, I won’t like what I find.
But he’s wrong, and I’m determined to prove it.
KILLIAN
Love can destroy a man. Bring him to his knees. That’s why I never let anyone get too close.
Until Eden.
Feisty.
Stubborn.
Irresistible.
She’s on a mission to knock down my walls. Dig up truths better left buried.
I need to convince her that walking away is the right choice… before it destroys us both.

“What do you do in your free time?” he asked.

Was this an interview or was he just making small talk? He didn’t strike me as a small talk kind of guy. “Since I moved to Brooklyn, I’ve been checking out the neighborhoods. Taking photos. And visiting art galleries. I run every day. And I draw and paint.” I wasn’t sure why I said that. I used to draw and paint, but it had been six months since I’d picked up a pencil or paintbrush.
“Which artists do you like?” He tilted his head, as if the answer really mattered to him.
I didn’t know what kind of answers he was looking for, or how this had anything to do with bartending. “I like Picasso. Especially his Blue Period. Frida Kahlo. Willem de Kooning. Rodin’s sculptures. And the street art and graffiti in Brooklyn.”
I stared at the black and grey inked tattoos on his left arm. I’d add them to my list of art I liked. Intricate designs, interwoven with thick swirls and chains. A shield of armor on his upper arm. An anatomical heart and dagger. A Celtic cross. A banner trailing down his forearm, with words written in script. Not English. Latin? I wanted to know what it said and meant to him.
“Why should I take a chance on you?” he asked, reminding me of the reason I came here in the first place.
I dragged my gaze back to his face. God, he was gorgeous. His face was a study in symmetry. My fingers itched to hold a charcoal pencil so I could sketch him.
“I’m looking for a fresh start.” Something like recognition flickered in his eyes, but it was so fleeting, I might have imagined it. “That’s why I moved to Brooklyn.”
“By yourself?” he asked.
I nodded.
“That’s brave.”
I wasn’t sure about the brave part. So far, it was lonely. And a lot harder than I’d expected. “I really need this job. Brooklyn is expensive. And I can’t go home. I just…can’t.”
He studied my face, and I wondered what he saw there.
“These are the rules. Number one: don’t lie to me. Number two: don’t steal from me. You ring up every drink you serve. You don’t give free drinks to your friends. Number three: no drugs. If you break any of my rules, you’re out. Got a problem with anything I said?”
“Are you offering me a job?” I asked, gripping my lower lip between my teeth to keep from smiling. His gaze dropped to my mouth and lingered there before he shook his head and looked away.
“I’m offering you a chance. Not everyone is cut out for bartending. So?”
“I don’t lie, steal, or do drugs.” The two times I’d smoked pot with Trevor didn’t seem worth mentioning.
I held Killian’s gaze until he nodded, satisfied I was telling the truth. My face broke into a smile, but he held up his hand to stop me from getting too excited. “You’ll have guys hassling you. When they get drunk, they say and do stupid shit. I’m not saying it’s right,” he shrugged one shoulder, “but you’re not unattractive, so you’ll need to deal with that.”
“I’m not unattractive? Are you always this charming?”
“If you’re looking for Prince Charming, it ain’t me, sunshine.”
Sunshine? At least he didn’t make any empty promises or pretend to be something he wasn’t. “I don’t believe in fairytales. Or happily ever after. Prince Charming was an evil villain in disguise, and Cinderella was the doormat he wiped his feet on.” His brows went up a notch. “So, don’t worry. I’m not looking for Prince Charming. I’m not looking for a guy to sweep me off my feet either. I’m just looking for a job. And I can handle guys hassling me. My dad and two older brothers taught me how to fend for myself.”
He raised a skeptical eyebrow. “Did they?”
“Yes, they did. My dad and brother are state police officers and my other brother is a Marine. I grew up in a testosterone-fueled house with enough badassery to rub off on little old me.”
His lips curved into a smile, showing off his straight white teeth…and—oh God, dimples. He had dimples. But the smile faded all too quickly, as if he’d caught himself doing something he shouldn’t, and the mask slipped firmly into place again.

Emery Rose has been known to indulge in good red wine, strong coffee, and a healthy dose of sarcasm. She loves writing sexy alpha heroes, strong heroines, artists, beautiful souls, and flawed but redeemable characters who need to work for their HEA.
When she’s not working on her latest project, you can find her binge-watching Netflix, trotting the globe in search of sunshine, or immersed in a good book. A former New Yorker, she currently resides in London with her two fabulous daughters and one grumpy, but lovable Border Terrier. 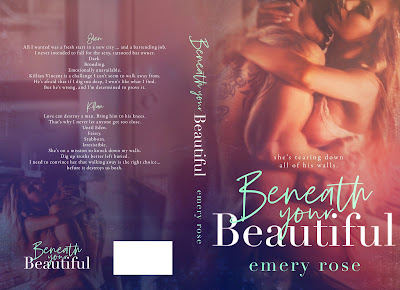