Review of "Never Tap Out" By: Victoria Prince 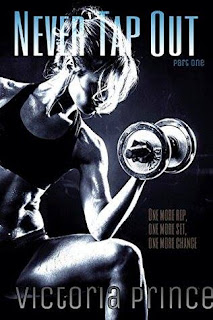 "Never Tap Out" By: Victoria Prince
Rating: 4.5 stars
Kate never got to kiss her mother one last time or tell her how much she loved her. While Kate was at the rehabilitation center she met Rick, he agreed to train her and he became her ride to and from her rehab sessions. Rick is training Kate for her match against Wendy. She had to do a lot of different things during her week before her match, one thing was wrestling men who were not in her weight class.
Kate is a wrestler, blames herself for her mothers death. Her mother is still a big part of who she is trying to become. She doesn't let anyone in, she has a younger brother. Rick used to be Kate's mom trainer, he wants Kate to open up. He also wants her to see her potential. Martin is Kate's favorite bartender. Charles is Kate's younger brother, he is in rehab. Pushed Kate away after their mother's death. Jax is a wrestler, wants to be with Kate.

This is another amazing read by Victoria Prince. This book is very well written and the characters are very well developed. I loved that I felt very connected to the characters and that I was drawn into the story from the first page.